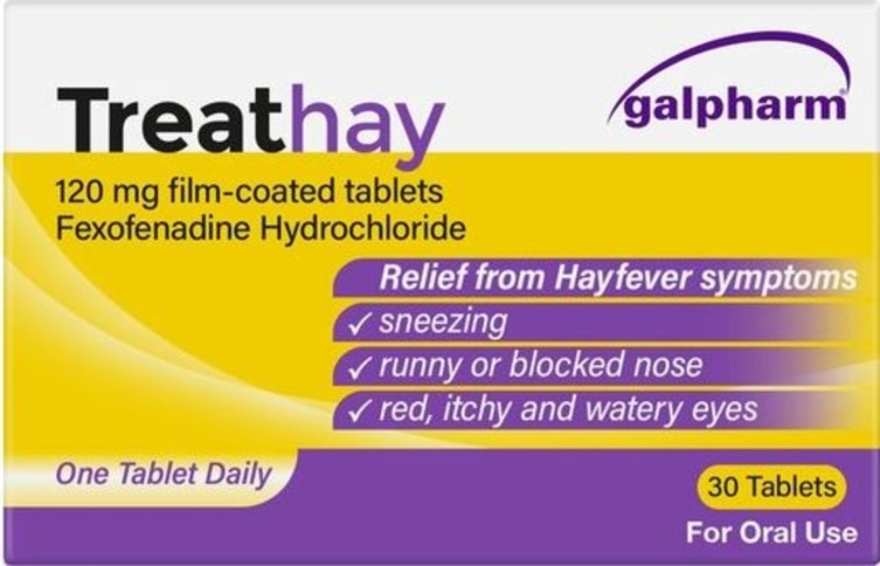 1. Name of the medicinal product

TREATHAY 120 mg tablet is indicated in adults and children 12 years and older for the relief of symptoms associated with seasonal allergic rhinitis.

4.2 Posology and method of administration

The recommended dose of fexofenadine hydrochloride for adults is 120 mg once daily taken before a meal.

Fexofenadine is a pharma­colo­gic­ally active metabolite of terfenadine.

Adolescents aged 12 years and over

The recommended dose of fexofenadine hydrochloride for adolescents aged 12 years and over is 120 mg once daily taken before a meal.

Children under 12 years of age

The efficacy and safety of fexofenadine hydrochloride 120 mg has not been studied in children under 12.

Studies in special risk groups (elderly, renally or hepatically impaired patients) indicate that it is not necessary to adjust the dose of fexofenadine hydrochloride in these patients.

TREATHAY 120 mg tablet is for oral use.

Hyper­sen­sitivity to the active substance or to any of the excipients listed in section 6.1.

4.4 Special warnings and precautions for use

As with most new medicinal products there is only limited data in the elderly and renally or hepatically impaired patients. TREATHAY 120 mg tablets should only be administered in these special groups on the advice of a doctor.

Patients with a history of or ongoing cardiovascular disease should be warned that, antihistamines as a medicine class, have been associated with the adverse reactions, tachycardia and palpitations (see section 4.8) and should use TREATHAY 120 mg tablets only on the advice of their doctor.

TREATHAY 120 mg tablets should not be used in children under 12 years of age. In children from 6 to 11 years of age: fexofenadine hydrochloride 30 mg tablet (prescription only medicine) is the appropriate formulation for administration and dosing in this population.

This medicine contains less than 1 mmol sodium (23 mg) per tablet, that is to say essentially 'sodium-free.'

4.5 Interaction with other medicinal products and other forms of interaction

Fexofenadine does not undergo hepatic biot­ran­sfor­ma­tion and therefore will not interact with other medicinal products through hepatic mechanisms. Coad­mi­nis­tra­tion of fexofenadine hydrochloride with erythromycin or ketoconazole has been found to result in a 2-3 times increase in the level of fexofenadine in plasma. The changes were not accompanied by any effects on the QT interval and were not associated with any increase in adverse reactions compared to the medicinal products given singly.

No interaction between fexofenadine and omeprazole was observed. However, the administration of an antacid containing aluminium and magnesium hydroxide gels 15 minutes prior to fexofenadine hydrochloride caused a reduction in bioava­ila­bility, most likely due to binding in the gastro­in­tes­tinal tract. It is advisable to leave 2 hours between administration of fexofenadine hydrochloride and aluminium and magnesium hydroxide containing antacids.

There are no adequate data from the use of fexofenadine hydrochloride in pregnant women.

Limited animal studies do not indicate direct or indirect harmful effects with respect to effects on pregnancy, embryonal/­foetal development, parturition or postnatal development (see section 5.3). TREATHAY 120 mg tablets should not be used during pregnancy unless on the advice of a doctor.

There are no data on the content of human milk after administering fexofenadine hydrochloride. However, when terfenadine was administered to nursing mothers fexofenadine was found to cross into human breast milk. Therefore TREATHAY 120 mg tablets is not recommended for mothers breast-feeding their babies. Breast-feeding women should only use TREATHAY 120 mg tablets if advised to do so by a doctor.

4.7 Effects on ability to drive and use machines

On the basis of the pharmacodynamic profile and reported adverse reactions it is unlikely that fexofenadine hydrochloride tablets will produce an effect on the ability to drive or use machines. In objective tests, fexofenadine has been shown to have no significant effects on central nervous system function. This means that patients may drive or perform tasks that require concentration. However, in order to identify sensitive people who have an unusual reaction to medicinal products, it is advisable to check the individual response before driving or performing complicated tasks.

The following frequency rating has been used, when applicable

Not known (frequency cannot be estimated from the available data).

Within each frequency grouping, undesirable effects are presented in order of decreasing seriousness.

In adults, the following undesirable effects have been reported in clinical trials, with an incidence similar to that observed with placebo

In adults, the following undesirable effects have been reported in post-marketing surveillance. The frequency with which they occur is not known (can not be estimated from available data)

Reporting suspected adverse reactions after authorisation of the medicinal product is important. It allows continued monitoring of the benefit/risk balance of the medicinal product. Healthcare professionals are asked to report any suspected adverse reactions via the Yellow Card Scheme at: www.­mhra.­gov.­uk/­yellowcard or search for MHRA Yellow Card in the Google Play or Apple App Store

Dizziness, drowsiness, fatigue and dry mouth have been reported with overdose of fexofenadine hydrochloride. Single doses up to 800 mg, and doses up to 690 mg twice daily for 1 month, or 240 mg once daily for 1 year have been administered to healthy subjects without the development of clinically significant adverse reactions as compared with placebo. The maximum tolerated dose of fexofenadine hydrochloride has not been established.

Standard measures should be considered to remove any unabsorbed medicinal product. Symptomatic and supportive treatment is recommended. Haemodialysis does not effectively remove fexofenadine hydrochloride from blood.

Fexofenadine hydrochloride is a non-sedating H1 antihistamine. Fexofenadine is a pharma­colo­gic­ally active metabolite of terfenadine.

Human histamine wheal and flare studies following single and twice daily doses of fexofenadine hydrochloride demonstrate that the medicinal products exhibits an antihistaminic effect beginning within one hour, achieving maximum at 6 hours and lasting 24 hours. There is no evidence of tolerance to these effects after 28 days of dosing. A positive dose-response relationship between doses of 10 mg to 130 mg taken orally was found to exist. In this model of antihistaminic activity, it was found that doses of at least 130 mg were required to achieve a consistent effect that was maintained over a 24 hour period. Maximum inhibition in skin wheal and flare areas was greater than 80%. Clinical studies conducted in seasonal allergic rhinitis have shown that a dose of 120 mg is sufficient for 24 hour efficacy.

Fexofenadine undergoes negligible metabolism (hepatic or non-hepatic), as it was the only major compound identified in urine and faeces of animals and man. The plasma concentration profiles of fexofenadine follow a bi-exponential decline with a terminal elimination half-life ranging from 11 to 15 hours after multiple dosing. The single and multiple dose pharma­coki­netics of fexofenadine are linear for oral doses up to 120 mg BID. A dose of 240 mg BID produced slightly greater than proportional increase (8.8%) in steady state area under the curve, indicating that fexofenadine pharma­coki­netics are practically linear at these doses between 40-mg and 240 mg taken daily. The major route of elimination is believed to be via biliary excretion while up to 10% of ingested dose is excreted unchanged through the urine.

Radiolabelled fexofenadine hydrochloride in tissue distribution studies of the rat indicated that fexofenadine did not cross the blood brain barrier.

Fexofenadine hydrochloride was found to be non-mutagenic in various in vitro and in vivo mutagenicity tests.

In a reproductive toxicity study in mice, fexofenadine hydrochloride did not impair fertility, was not teratogenic and did not impair pre- or postnatal development.

Store the tablets in the original package. This medicinal product does not require any special temperature storage conditions.

6.5 Nature and contents of container

Not all pack sizes may be marketed.

6.6 Special precautions for disposal and other handling

No special requirements for disposal.

10. Date of revision of the text

There are no reviews yet.

UK Standard Delivery:
Within 3 working days (excluding public holidays).
Cost is £3.75.
Completed by a Royal Mail or a Courier.

UK Next Working Day Tracked Delivery:
With the busy period for couriers this may take up to 2 working days.
You can opt for next working day tracked delivery for some items (excluding public holidays). To find out which items please contact us. Orders must be placed by 11am Monday to Friday.
Cost £5.95.
Completed by Royal Mail or a Courier.
Please note that we only deliver to the UK.